Home » Politics » You are reading »

Govt proposes IT Act changes to allow apps, sites to be take down

NEW DELHI: The government plans to amend the IT law to increase penalty on apps and websites that are unable to control fake news and child pornography. Amendments will include an extreme provision of taking down apps and websites in violation.

The move comes days after senior officials of the IT ministry met representatives from top global social-media and internet companies and sought their views on proposed rules that would, among other things, help trace the origin of unlawful content. This is one of the key areas of dispute between the government and companies.

“We need accountability and power to heavily penalise the companies in case of violations, or refusal to cooperate,” a senior government official told TOI, on condition of anonymity. 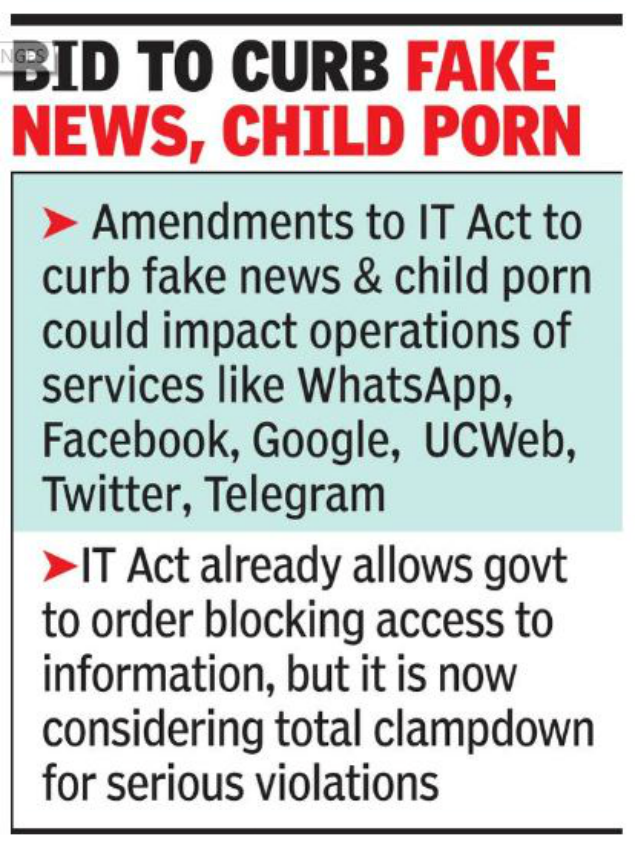 The government had last year carried out an exercise to determine whether blocking websites and apps was technically feasible, if telecom companies and internet service providers were asked to do so. The issue is still being discussed.

“Even the penalties that we currently have under the IT Act are not sufficient and need to be revised. Many global companies have big turnover and relatively-small penalties may not be a sufficient deterrence. We are taking a cue from the penalty proposals in the data protection bill,” another government officer said.

The data protection bill, finalised by the government, proposes the maximum penalty at Rs 15 crore or 4% of the worldwide turnover of the violator, whichever is higher.

Cyberlaw experts say that there is very little in the IT law to tackle the fake news phenomenon. “We do not have any law to take the companies to task on this issue. They can be proceeded against only under the Indian Penal Code provisions, and not as per the IT Act,” says Puneet Bhasin, a cyber law expert. “We do require stricter laws and effective enforcement, including having data localisation,” Bhasin adds.

Law and IT minister Ravi Shankar Prasad had told the Rajya Sabha in July last year that rules are required to ensure that internet platforms do not become vehicles to commit crime, incite hatred, provoke terrorism, extremism and promote money laundering. He also said the government was looking at regulating the services of foreign internet companies operating in India to make them accountable to Indian laws and judiciary.

While Section 69A of the IT Act gives powers to the government to order blocking of access to information that is detrimental to the sovereignty, security and friendly relations of the state, the government is considering whether there can be a total clampdown on the operations of an app or website in case of serious violations.

Here’s the process to change WhatsApp number without losing chats

Made to pay more for Aadhaar update or new enrolment? UIDAI asks to do this fast

Spare wheel not compulsory for all passenger vehicles – MoRTH

Here’s how to check status of Aadhaar-Pan link