How the World Test Championship will work

NEW DELHI: The World Cup hangover is over and it’s now time for a new battle. The inaugural edition of the World Test Championship will kick off with the upcoming Ashes series from August 1 in Edgbaston. India, too, will be part of the first leg of the Championship, when they clash against the West Indies, while Sri Lanka will take on New Zealand at home as part of the Championship.

Here are the salient points of the format of the World Test Championship, a series which the ICC is hoping will see fans find renewed interest in the longest format of the sport:

It has been learnt that most of the Indian players will opt for their limited-overs jersey numbers in the Test series against the West Indies.

Here is India’s schedule for the World Test Championship: 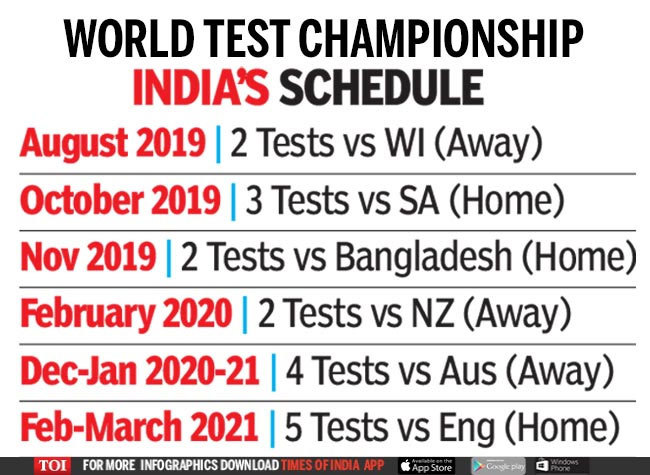 Following a two-year trial, the ICC has also approved concussion substitutes in international cricket. The rule will be effective from the Ashes series.

Also, International cricket captains will no longer run the risk of being suspended for slow over-rates with the ICC deciding to instead dock points and fine the entire side for any such violations, starting with the World Test Championship.

IPL13 schedule is out – Here are Timings, Venue, Fixtures

« Now, pay Rs 10,000 as penalty in case you enter wrong Aadhaar number for transactions
Your electricity bills may shoot up from August; here’s why »